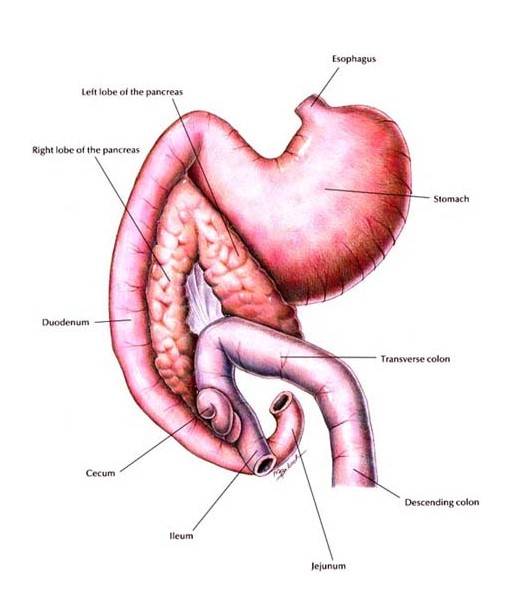 What is the pancreas?

The pancreas is a gland located in the abdomen, close to the stomach, and has a number of vital roles in the body. Firstly, the pancreas secretes digestive enzymes into the small intestine that help break down food, allowing absorption of nutrients. Secondly, then pancreas is vital in the production of insulin and glucagon which are vital for regulation of metabolism and controlling blood sugar levels.

Pancreatitis is a condition involving inflammation of the pancreas. Pancreatitis can be due to infection, gastrointestinal upset or idiopathic inflammation, and it can be sudden and severe, or more chronic and low-grade.

When an animal has pancreatitis, the pancreas becomes inflamed, swollen and painful. Digestive enzymes that are normally released only during digestion are released too early, causing severe damage. The surrounding tissue becomes further inflamed which can then damage the nearby liver.

Pancreatitis is usually extremely painful and can cause severe illness, and can be lifethreatening if left untreated.

Pancreatitis affects both dogs and cats, as well as other animals, and pets who have had a bout of pancreatitis can be prone to relapse, so careful aftercare and diet is an important part of prevention.

What are the signs of pancreatitis?

Common signs of pancreatitis include:

If your dog or cat has severe vomiting, nausea or gastrointestinal signs that do not respond to treatment we would recommend an immediate check by a vet. For useful veterinary contacts please click here.

How is pancreatitis treated?

Treatment of acute pancreatitis requires most animals will need to stay in hospital for therapy including intravenous fluids (a drip), antibiotics, pain medication, anti-vomiting medication and dietary modification.

Careful and thorough treamtent is usually required, and it can time for the pancreatitis to resolve.

Aftercare and management of pets with pancreatitis is also very important, as relapse and recurrence is possible. Your vet may recommend a special diet such as Royal Canin Gastro Intestinal Or Hills i/d to help improve the long-term outlook and healing.

Although a very serious condition, most pets recover well from pancreatitis following treatment in hospital.

Sold out
Sold out
Sold out
ENG中
ENG中
New to Vetopia?
Create an account with us to view your order status online. Your details can also be saved for faster checkout.
SIGN UP TODAY
ALREADY REGISTERED? SIGN IN
CustomerHub